Look See Proof: If we could earn ourselves a minimum wage that would do it for us 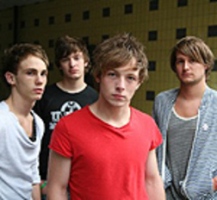 Hey guys, too bad that we couldn't do this interview in person! It's always so much nicer to be able to react to the replies, but anyway... So, tell me what happened. I heard someone lost his passport?

Yeah that was me (Jaime). At the moment it is somewhere in Germany, I honestly have no idea where.

Hope you got it all sorted out in the meantime!

Is this your first time in Germany as a band or at least on your own headlining tour?

It's our second time in Germany. The first being when we played Obstwiesenfestival back in July. This second trip over has been totally awesome and so so overwhelming that so many people have been coming out to the shows.

You already had a gig in the US whereas it takes other bands ages to get there. How were you received by the audience?

That's a tough one really as it was a big industry event. But we did seem to go down well.

What other countries have you been to as a band?

Is there any difference in the crowd? Do people in different countries react differently to your music?

Yeah man it's weird, there is nothing majorly different. You can just feel a different vibe in each country. Apart from in Russia where the crowds are just flat out insane.

You already toured with some great names of the indie scene like The Fratellis, The Rifles, Foals... How did that all come about?

We are lucky enough to have an awesome booking agent called Steve Zapp. He sorts all this stuff out for us and then we get to go have tons of fun playing the shows.

How was that experience for you? What did you learn from those bands (if anything)?

I don't think we ‘learnt' anything as such from those bands, but you do pick up little bits here and there. Also watching other bigger bands does give you that extra push to try and better yourself.

Going back to the beginning: What are your reasons for making music? Why did you want to form a band?

Without sounding like a massive cliché, the band was started out of a love for music. I'd be lying if I said there were other reasons.

In your band all the members are singing which is pretty unusual. I just know it from The Futureheads e.g. Why did you decide to do that?

It's through a combination of us wanting to create the biggest sound we can and us all having big mouths and wanting to speak on stage. Fleetwood Mac all sung as well right?

You are still very young (no offence, you should be glad about that) but already quite successful. Does that already have any effect on your life or your personalities?

Personality wise, I think we are the same people we started out as. For me personally it's a totally weird feeling to be this young and having the chance to be doing what we are doing.

There are a lot of young British indie bands nowadays that are successful only a few years after having formed. Do you think it's easier to become big very fast today?

No not at all. I think bands like us that have had a little ‘success' and just completely lucky. We all know bands that have been around for years back home that are far better then us and most bands out there at the moment and they are still getting no where. It's all very upsetting, but I guess that is the nature of the beast?

But isn't it more likely nowadays that success doesn't last that long?

I guess success is what you make of it and how you perceive success in the first place. Some bands and artists may only be happy and class there self's as it after they have been touring stadiums around the world for fifty years. Where as I think with us if we could earn ourselves a minimum wage and enough to pay our bills from playing our songs I think that would do it for us.

Do you even think about that at all?

When you are spending at least five hours in a van everyday on tour, you get time to think about most things. This can sometimes be really good and on the other hand the worst thing ever. We tend not to worry too much though; it's not worth the stress at the end of the day.

As I read on your myspace blog you guys still have regular jobs, right? What are you all working and how do you manage to go on tour and practice?

We all often get into arguments with people who think because we go to different countries every other month and we don't have full time jobs we have it totally easy. But the reality of it is that we spend every free moment (when we are not touring or in the studio) working our arses off. I think we are all happy to be doing this at the moment, as it feels like we are paying our dues fairly. Does that even make sense? It's all the working I have been doing...

David and Lee: Your dad seems to be one of you biggest fans, he always posts really nice and reassuring comments on your myspace blog. How important are your families to all of you?

I think without our families we wouldn't be able to do this. Endless encouragement, hot dinners and wiring money into our bank accounts to pay for new passports when we lose them in foreign countries.

He has his own band, Optimist, and your brother Barry directed some of your videos. Seems like the Sells family is a very creative one. Ever thought about doing a creative family venture?

I think it must have been something their mum gave them when they were growing up. They are a talented bunch of people and it would be silly not to do some massive joint project at some point.

Where do you get the ideas for your songs and how can I picture the songwriting process?

We always seem to writing about what is going on in our lives. I don't think you can write about much else right? I mean, we can't start writing about what a hard up brining we had in the ghetto or the amount of girls and money we have... because quite simply, we don't have any of these.

Are you writing while you are on tour?

We try to man, some days all we want to do it play music but then again sometimes it's a struggle to get through soundcheck. I suppose it's the same with everyone and their jobs. We have been pretty good at the moment with our writing. We are dying to finish this second album get it ‘out there'.

You already had five singles out before your debut was released, normally it's the other way round. Are you already gathering stuff for a new album?

Yeah, like I say we are spending a lot of time at the moment trying to writing new songs for this second album.

Well, that's it! Hope we'll get the chance to catch up in person in a not too distant future. You really have to come to Munich, I guess a lot of people were disappointed that the gig was called off - including me.

I think we are going to be coming back in Feb/March next year!

Have a great rest of your European tour!