Lily Electric: "It is rarely possible for me, not to feel sad and happy at the same time" 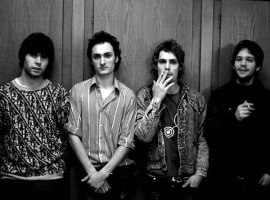 
What's the story of Lily Electric?
We met in 2005 in Copenhagen. We call our first rehearsal, "the magical session". Kind of silly, but we felt the vibe between us was very special and exiting, we've kept it ever since and now our debut album is finished. After we released our first recordings, "8 Song Mini Album", we wanted to put our fates at stake and move together to Berlin. We still love the city and two of us are still living here and the music still draws us together.

How did you come up with the name? There is no electro in your songs.
The name is partly inspired by Jimi Hendrix´s "Electric Ladyland", and not because of electro music. We didn't really spend time on electronic music before we came to Berlin. Here we got it under our skin, and in the future it will be a part of our music. We wanted a name that was general and combined naivety and Rock´n'Roll.

A few years ago you moved from Copenhagen to Berlin. What made you do that?
We felt we had to get away from our backgrounds to create a new identity. We needed to concentrate and focus on our band and music and couldn't think of any better place to go. Berlin has given us a lot both musically and personally. Things we wouldn't have learned and experienced if we'd stayed in Copenhagen.

How would you describe the differences between those two cities?
There is some kind of atmospherical difference. Berlin is more caught up and created by its important and dramatic history. It could be a difference between German and Danish people, but I see it more as a result of how people live under different circumstances and possibilities. Copenhagen is a rich welfare city, with a lot of support for culture and arts. The problem is that that don't necessarily make good art. Berlin is somewhat opposite, it is poor and more diverse...and just bigger. Creating bigger subcultures and various grounds for extremes...depending on what you like, that's where you should live.

How do both of them inspire your music and lyrics?
Hmm...a difficult question. I personally don't know if the cities do that. People inspire the lyrics, and inspire to write a song. Of course, when moving to Berlin we've experienced a lot of new things, and met a lot of new people and that is all very inspiring. One of the things we've musically been inspired by is electro and the experimental scene, and Krautrock. But that is maybe not so obvious on this debut album, since we wrote it only 5 months after coming here, and it takes time to get it under your skin. It can be inspiring to walk down the street in both cities. it depends on who you meet, what you see, and how you wish to see it.

In February you did a small tour in Germany. How did that go? What were the reactions of the audience?
We were very happy about that tour. We enjoyed it very much and felt that the German audience took us in, and also enjoyed us. We are very exited to go on our first headlining German tour in a month, in May. We hope to see a lot of people at our shows.

Is there already a bigger tour in the make our will you play any festivals this summer?
We haven't got the dates yet for the summer and fall. But yes, there is a bigger tour being put together and we will also play at some festivals in the summer. But I can't say anymore about it now.

You've already toured with well known bands like Maxïmo Park or Cold War Kids. Is it like a learning experience to play with established bands? What do you take home from that?
Yes, of course it is. We don't think we are like any of these bands though, but playing with them gives us more knowledge about the professionalism. But we like to keep it always interesting and new for us, which sometimes disappears with big shows. One of the maybe important things is that it gives a lot of energy and blood on the tooth.

In the music media your musical style is mostly described as "art rock". The cover of your album and its title "You're In The Painting You Saw" also refer to fine/ visual arts. Is art an inspiration for you?
We can't say that we look at a painting and then just write 5 new songs. Painting is like music an art form, a way and method of expressing yourself. And to see and feel how other people on this planet express themselves is always inspiring. So in that sense yes, but not directly. Art rock is a musical expression and we are among a lot of music very inspired by the genre art rock.

Who are your favourite painters?
Phhh....We can't really answer that. First of all we are musicians and composers. We have an interest in any kind of art, but music is what we know a lot about. We of course all have some favourite painters. But we don't know 10% more about paintings than most people do. Mia Edelgart, a young Danish artist, has made the covers for "You're in the painting you saw" and "8 Song Minialbum", and we like her style and how it works with our songs.

Both the cover of the album as well as the lyrics of "You're In The Painting You Saw" are on the one hand merry and colourful but on the other hand there's an aspect of melancholy or even threat (plague masks). In what is this dualism rooted?
Personal insecurity I guess. There are a lot of questions to be asked, to the people close around you and to yourself. We wanted to make a not so sad record, but some of the lyrics are actually pretty sad and melancholic. There also are a lot of questions in the lyrics, doubt too. And a lot of pointed fingers and opinions. It is rarely possible for me, not to feel sad and happy at the same time. I am still trying to find out where the roots come from, I hope to find it in a song someday. Guess we like dualism a lot, kind of gives everything a little twist, doesn't it?