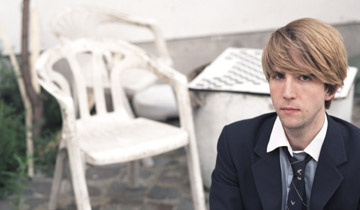 Unruhr:
The "Klangraum Phönix" on which you will perform describes itself as a "festival of electronic pop-culture". Do you think this description is in any way appropriate for your own music? Many musicians don´t like to be pigeonholed. What´s your opinion about this?

Owen:
Huh? Musicians don't like to be pigeonholed? I guess you're right. Musicians are just looking to be widely understood by a massive audience while maintaining DIY credibility. They are hoping to be as relevant 20 years from now as they are today. They are hoping to "invent a genre" and then "transcend the genre". I guess pigeonholing doesn't factor into that, no.

Unruhr:
Have you ever been on tour in Germany before? And if yes, what was your impression of the german audience? Do you have any expectations regarding the "Klangraum Phönix"?

Owen:
I've been to Germany a few times. By myself, with Arcade Fire and with Hidden Cameras. German audiences are very friendly! I always eat the best food in Germany. There is a woman names Heike in Berlin, she promoted a Final Fantasy show in Magnet. She is the best cook I have ever tasted. (Anm. Unruhr: siehe oben bei “2.”…)

Unruhr:
Electronics have revolutionized music. But although there are vast possibilities to use them, one sometimes has the feeling that nothing really new is created. In your opinion, in what directions may the development of electronic music lead in the next few years?

Owen:
That's a very cynical outlook. I think all music is new and interesting.
I do wish electronic musicians would think a little more about a more academic concept behind their music instead of just "kicking out the jams". Though "the jams" are often nice too, sometimes.

Owen:
Nothing more than the quality of the catering. Arcade Fire get some nice dips and vegetables. I enjoy touring by myself more, however. For example, yesterday we drove all the way from Colmar (France) to Bologna. We made the drive with Arcade Fire before, but it was at night and we were sleeping. Much nicer to have to do it yourself. There were mountains and fog and friendly people who spoke dozens of languages.
All of us in the van smiled a lot and said, "The world is so beautiful today!" Then we came down from the mountains and realized all the happiness was just caused by the high altitudes.

Unruhr:
You haven´t only worked with The Arcade Fire, but also with Do Make Say Think. Does the work with these bands have an influence on Final Fantasy? And in which way?

Owen:
I steal a great deal from both bands. From Do Make Say Think I steal their 12 minute song structures, and from the Arcade Fire I steal their flat-III chords.

Unruhr:
Okay, now some standard questions to the end. I admit that these may be boring, but here they are: what kind of music do you listen to?

Owen:
Top 40 pop. I really like Max Martin, he's a wonderful pop songwriter. I mean, his writing totally kills most indie bands.
I like Josephine Foster and Born Heller a lot.
I'm very excited about a young musician from Toronto named Colin Bergh. He plays guitar and sings in Swedish and it's the most beautiful and terrible thing you've ever heard. It sounds like Nick Drake covering Sunn O. Amazing.

Unruhr:
I guess you´ve heard many questions from many people so far. But is there any question you would like to be ask that has never been asked to you before?